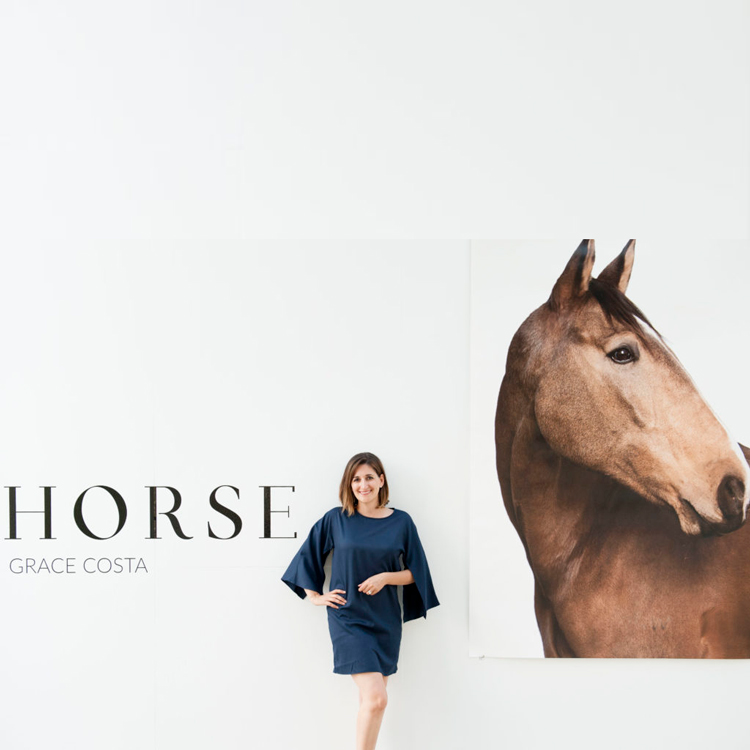 My HORSE Story In All Its Glory – By Beth Jennings

“The two ladies that just came into the gallery were burnt in the 2003 Canberra bushfires saving their horses. It looked like one lady had lost her fingers. She had burns on her face, all down her arms. Her mother had burns on her face. I think people would save their horse in a fire because their animals are like family members.

When I think of horses I think of family. We all rode horses. We’ve always had horses in our life. No matter where we lived we had horses. They’ve come and gone through our life. They were always sold, we didn’t keep them, except in some cases where we had them for life as pets until they passed away and that was always very traumatic.

When I was writing my journal, I was writing about ‘the why’. My father came through in it a lot. I was digging really deep into how my father was involved. It got really intense and I had a breakthrough. It made me really emotional discovering that connection between me and my Dad. It was that horses tie me to my father. I only ever went riding if my father was there. He’d saddle it, put the bridle on, did all the work. I just had to turn up.

When I was a kid I loved anything with horses on it. As a teenager my bedroom was filled with horse pictures, and horse paraphernalia. I was obsessed with them. I had a passion for them, like lots of other young girls, except I was fortunate to own one. At that time though, I had a fear of them, too. I was riding, but I had a fear of them because I didn’t understand them.

‘Fantasy’ is a word I think of with horses, they are kind of like a fantasy object. They are mysterious, I love their shape, the outline, the form, I love their…I love their…natural behaviours. Why they act the way they do in the wild. That’s why I photographed them unbridled, in their stark shape, it’s the only thing that makes them recognizable as a horse. It’s that outline that’s unmistakable.

The Stromlo site supported the theme about presence. It’s a ruin of the old telescope observatory which was part of the Australian National University. It was situated in the forest that burned in the fires. The site has an echoy ambience. Oddly enough it still feels like a room. When you walk in, it has the entrance, the windows without glass and the roof is gone.

I should have brought my journal – that’s got all the details of the process including my emotions and difficulties.

The horse has its limits. You can’t keep asking and asking without giving it a little bit in return. So if I’m asking him to stand there for five minutes, I have to give him five minutes break in return. I can’t keep going give me more, give me more, give me more. I’m conscious of when I have to give him breaks. We’d usually shoot for about an hour because I felt like asking for more than an hour was too much for the horse, and the owner.

Even right at the beginning…when I asked Dad to photograph one of his horses – we got up at 7am to wash him, put him on the float and drive 40 mins to go to Stromlo. I thought, oh my God I’m asking so much of my Dad, this is so much effort.

Then other people were saying, that’s a lot of effort to do that. There was this one person that kept challenging my effort for it. I had the effort for it but they saw it as a major logistical challenge. You shouldn’t ask that of them, it’s too much, nobody is going to want to bring their horse up there.

It is a lot to ask of people: I put the owners out of their convenience, you have to trek up this winding hill, and I only had a short period of light before it went down in the evenings.

At the end of the day they loved participating and they’ve all told me they are really thankful to be a part of it. They enjoyed having their horse in the series, be out of its comfort zone and to do something interesting like that.

This horse project – no matter how logistically challenging it was, that took most weekends for the whole year, made me work with complete strangers and didn’t guarantee me any results – I knew I had to keep doing it to push through.

If I want to do something I will find the way to do it, if it means something to me.

For me it was a pleasure to get up on a Saturday and Sunday after full time work. And when I stopped because it was complete, I missed driving up there – my friends were my assistants, my generous helpers that were there for an hour or so to move the lights around, to give up their time to help me out. But we all had fun on the shoots even the toilet accidents from the horses were pretty funny!

It was just in somebody else’s eye that it was a logistical nightmare. To me it didn’t seem like a chore, because I loved it.

I still don’t know what I’m doing, but I know I want to continue doing it. I want to be on a large scale, doing my horse stories, my way. I feel like they are a subject I’m willing to trudge around for, to go to big extremes for, to make amazing stories, my way.

I was never meant to be an amazing horse rider, or trainer, but it’s me, photographing horses, in my way.”

Sometimes you don’t know what you are doing, som

Showing your customers how your product is used is

If you are looking for a very special Christmas gi

Today we talk to @sarahj_your_va about how a virtu

The first episode is titled How to Declutter and O

Here it is my friends. My new creative project The

In this live I discuss my learnings from starting

Many of the people in my family are natural teache

Sometimes you don’t know what you are doing, som

Showing your customers how your product is used is

If you are looking for a very special Christmas gi

Today we talk to @sarahj_your_va about how a virtu

The first episode is titled How to Declutter and O

Here it is my friends. My new creative project The

In this live I discuss my learnings from starting

Many of the people in my family are natural teache

STAY IN THE LOOP

Keep in the loop for exhibition and event invitations, photography workshops and new releases of artwork.

STAY IN THE LOOP

Keep in the loop for exhibition and event invitations, photography workshops and new releases of artwork.

I respectfully acknowledge the Ngunnawal People as the traditional owners and custodians of the land on which my photography studio is located in Canberra.